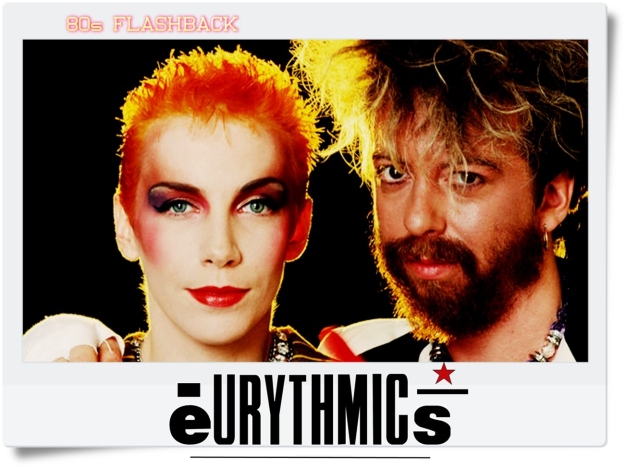 Eurythmics (often incorrectly referred to as ‘The Eurythmics’) are a seminal British synth pop duo consisting of Annie Lennox and David A. Stewart. Stewart (formerly of a folk-rock group Longdancer) and Lennox (a student at the Royal Academy of Music) quickly became lovers after meeting in the late 1970s, and formed a group called The Catch, with Pete Coombes, Stewart’s guitarist and songwriting collaborator. By 1979 (see 1979 in music), The Catch had become The Tourists, who released three moderately successful British albums, The Tourists, Reality Effect and Luminous Basement. They had a U.K. top five hit with a remake of ‘I Only Want To Be With You’.
Lennox and Stewart discontinued their romantic liaison in 1980 (see 1980 in music) and they began performing in duo form as Eurythmics. Their debut album, In the Garden (released Oct. 1981), featuring collaborations from members of Can and Blondie, was critically well-received but sold poorly. In this album, Lennox’s trademark powerhouse and soul-filled voice is not generally present. Although In The Garden has some fine songs, it is generally seen as being somewhat embryonic and developmental.
The follow-up, Sweet Dreams (Are Made of This) (1983, 1983 in music) became a huge British hit due to the title track, which quickly topped the American charts as well. Lennox was featured on the cover of Rolling Stone magazine. Stewart later admitted that the famous synth bass line in the song was discovered by accident when he inadvertently played a track backwards.
Touch, the follow-up to Sweet Dreams (Are Made of This), was released later in 1983 and spawned three major UK hits. ‘Here Comes The Rain Again’ (#4 in the U.S.) was the main hit from this album. Touch solidified the duo’s reputation as being major talents.
In 1984 they did the sound track to the motion picture 1984. The director of the film had previously hired a conventional film composer and refused to use their album except for the song ‘Julia’ which played near the end of the credits.
Their fourth album, Be Yourself Tonight, featured a duet with Aretha Franklin and continued the duo’s transatlantic chart domination in 1985. ‘Would I Lie To You?’ was a U.S. Billboard top 5 hit, while ‘There Must Be An Angel (Playing With My Heart)’ reached number one in the U.K. This was their first and only U.K. number one hit single.
Revenge was released in 1986, though sales somewhat petered out and signalled the end of Eurythmics’ mainstream success in America, ‘Missionary Man’ reached number 14 on the U.S. Billboard charts. Sales continued to be strong in the U.K. The Eurythmics went on a massive worldwide tour in support of this album. Revenge remains Eurythmics’ best selling album to date.
Stewart began producing, for Tom Petty and Bob Dylan, among others, while Lennox did some acting. They reunited in 1987 (see 1987 in music) for the critically acclaimed album, Savage. Although much less commercial than the two previous albums, Savage remains the duo’s masterpiece. Darkly psychological and synth driven, Savage was mostly ignored in the U.S.A., while sales in the U.K. were good.
In 1989, Eurythmics released the solid We Too Are One a UK #1 hit that did rather poorly in the United States, although ‘Don’t Ask Me Why’ and ‘Angel’ grazed the Billboard top 40.
After strenuous years of touring and recording (the Eurythmics released 7 albums in 7 years), Lennox needed a break — she took time off to have a baby and to consider a new direction after Eurythmics. Years of being together had constantly created a rift in the relationship with Stewart and from 1990 to 1998, Lennox and Stewart had virtually no communication.
In 1992 (see 1992 in music), Lennox released a solo album, Diva, which was a critical and popular sensation, while Stewart began writing film soundtracks and formed a band called Spiritual Cowboys. Stewart released a solo album in 1995 (see 1995 in music), Greetings from the Gutter, but it was a flop.
Eurythmics reunited in 1999 (see 1999 in music) and released Peace, their latest studio recording to date. Peace highlighted the enduring musical bond and creativity of the duo.