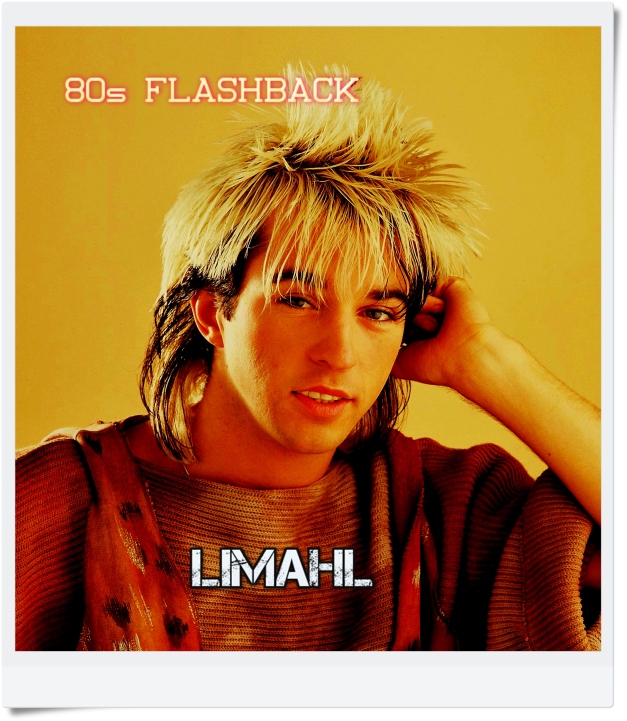 Christopher Hamill (born 19 December 1958), better known by his stage name Limahl (an anagram of Hamill), is an English pop singer. He rose to fame as the lead singer of the 1980s pop group Kajagoogoo, before embarking on a briefly successful solo career, which reached its peak with the 1984 hit “The NeverEnding Story”, the theme song for the film of the same name.

Chris Hamill was born in Pemberton, Wigan, Lancashire in NW England to Eric and Cynthia Hamill. He has one sister and two brothers. He attended Abraham Guest High School, before eventually enrolling at the Westcliff-on-Sea Palace Theatre Repertory Company.

With aspirations to be an actor, Chris Hamill toured with the company in a production of Joseph and the Amazing Technicolor Dreamcoat. In 1980, he was given a small role in an episode of the ITV police series The Gentle Touch. In 1981, he also appeared as an extra in the promotional video for Adam and the Ants’ number one UK single “Stand and Deliver”.

He had a keen interest in music, forming a short-lived punk band called Vox Deus. Next he joined and left a band called Crossword. Later he answered an advert in the music press to join a band to be called Brooks with Mike Nolan. He adopted his stage name (an anagram of his surname) at the time he was recruited by the existing members of Kajagoogoo, who were then performing under the name Art Nouveau.

The four members of Art Nouveau, the band who were yet to become Kajagoogoo, had placed an advertisement in the music magazine Melody Maker, asking for a ‘front man who could sing and look good’.Hamill attended the audition and subsequently joined the band which was then, after some deliberation, renamed Kajagoogoo. Soon after he had joined, Limahl met Nick Rhodes, keyboardist of the group Duran Duran, while Limahl was working as a waiter at the Embassy Club in London. Rhodes agreed to co-produce the band’s first single, “Too Shy”.

Limahl later said: “I met Nick Rhodes and it changed my life.” Kajagoogoo signed a deal with EMI, due in part to Rhodes’ involvement with the band, and the single “Too Shy” was released in January 1983. It went to number 1 in the UK Singles Chart and made the top 5 on the US Billboard Hot 100.

The band had further hits with “Ooh to Be Ah” (UK No. 7) and “Hang on Now” (UK No. 11), with their debut album White Feathers reaching UK No. 5. Their first major UK tour was attended by 60,000 people,and the final show at the Hammersmith Odeon in London was recorded and released on home video/Laserdisc (the 16-track White Feathers Tour).

In mid-1983, soon after the end of the White Feathers concert tour, the band sacked him by telephone. Limahl was quoted in the press as saying that “I’ve been betrayed!”, and that “I was sacked for making them a success”.

Limahl later said of his sacking: “I was in utter disbelief but the overwhelming emotion was anger, mainly towards the manager at first but later as I mulled over the ‘betrayal’, I was especially angry at my four professional colleagues who I had viewed not only as friends but almost as family.”The band themselves stated that Limahl had become difficult to work with as they didn’t share his vision for the band’s future. Soon after Limahl’s departure, bassist Nick Beggs commented that “It was a business decision and not one we took lightly. He wanted the band to go in a different direction to the rest of us. Eventually, we realised we were on a different planet to Limahl.” Beggs also stated that the band harboured no ill-will towards Limahl, and blamed the press for sensationalising the matter. Guitarist Steve Askew commented “At first…we did everything possible to make Limahl feel like part of the furniture but, you know, his lifestyle is so different from ours. We’re very normal people whereas Limahl likes the bright lights.”

After leaving the band, Limahl launched a solo career, achieving hits with “Only for Love” (UK No. 16) in 1983, and with “The NeverEnding Story” (UK No. 4) in 1984. The latter was the title theme from the film of the same name, composed by Giorgio Moroder.

The English version was sung with Beth Anderson, The French version (titled “L’Histoire Sans Fin”) was performed with Ann Calvert, with translated lyrics by Pierre-André Dousset. The single reached the Top 5 in several countries and was number one in Spain, Sweden and Norway.

His debut album, 1984’s Don’t Suppose, was a commercial failure in the UK, peaking at No. 63. It was better received in continental Europe with it topping the Norwegian album chart and reaching the Top 10 in Austria, Sweden and Switzerland.

Following this, Limahl released two more albums: 1986’s Colour All My Days and Love Is Blind in 1992, both of which failed to chart in the UK but found moderate success in Italy, Spain and Germany.

In late 2003, Limahl briefly reunited with the other members of Kajagoogoo for the VH1 special Bands Reunited (which aired in 2004), but this did not lead to a permanent reunion. Also in 2004, Limahl took part in the musical reality show Comeback on German TV channel Pro7. A year later, in 2005, he appeared in a similar UK show, Hit Me Baby One More Time on ITV. The episode in which Limahl appeared also featured Howard Jones, who had enlisted the services of Kajagoogoo bass player Nick Beggs to support him during his own performance.

Limahl eventually reunited with Kajagoogoo again in 2008. Now reformed in their original five-piece line-up, the band took part in various music festivals in Europe. For the next few years he continued performing live with Kajagoogoo and solo.

In 2011, the band released a new track, “Death Defying Headlines”, as a digital single. Limahl as a solo artist released a new single in 2012 called “1983”, co-written/produced with Norwegians Tommy Olsen, Rune Maurtvedt and Stig Antonsen. The track was released worldwide by Dig Music (Norway) on 10 January 2012.

In November 2012, Limahl appeared on ITV’s I’m a Celebrity…Get Me Out of Here! and he came in as a late-entrant contestant alongside Rosemary Shrager, spending a night together in an overnight challenge, to win the camp tea and biscuits.