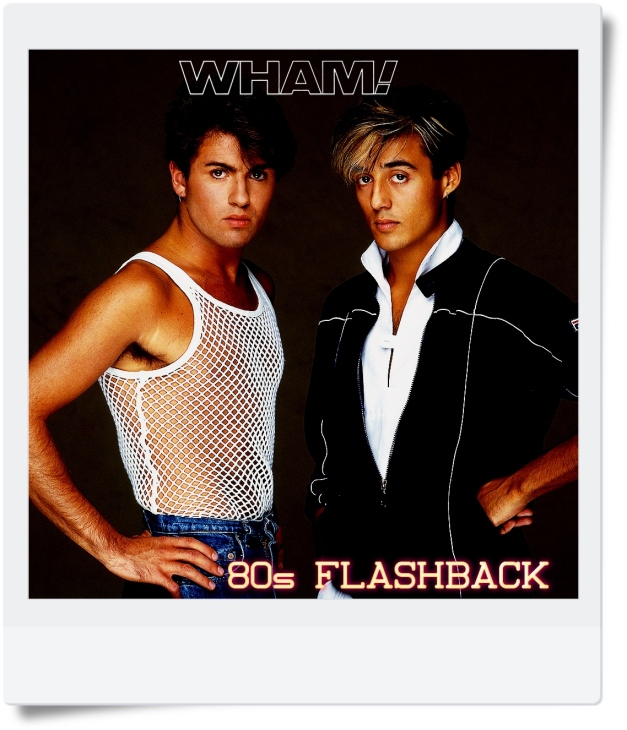 Wham! were an English musical duo formed by George Michael and Andrew Ridgeley in the early 1980s.They were briefly known in the United States as Wham! UK due to a naming conflict with an American band. Wham! sold more than 25 million certified records worldwide from 1982 to 1986.

Michael and Ridgeley met at Bushey Meads School in Bushey near the town of Watford in Hertfordshire. The two at first performed in a short-lived ska band called The Executive, alongside three of their former school friends David (Austin) Mortimer, Harry Tadayon and Andrew Leaver. When this group split, Michael and Ridgeley eventually formed Wham!, signing with Innervision Records.

Michael took on the majority of roles and responsibilities within the band—composer, producer, singer, and occasional instrumentalist. Still teenagers, they promoted themselves as hedonistic youngsters, proud to live a carefree life without work or commitment. This was reflected in their earliest singles which, part-parody, part-social comment, briefly earned Wham! a reputation as a dance protest group.

The debut record to be released by the band was “Wham Rap! (Enjoy What You Do)” in June 1982. It was a double A-side including the Social Mix and the Anti-Social Mix. The record was not playlisted by BBC Radio 1 in the UK, partly because of the profanity in the Anti-Social Mix. Separate videos were recorded for each set of lyrics.
“Wham Rap!” did not chart for the group, but in October 1982 “Young Guns (Go for It!)” was issued. Initially, it also stalled outside the UK Top 40 but the band got lucky when the BBC programme Top of the Pops scheduled them after another act unexpectedly pulled out of the show.
Wham!’s first manager was Bryan Morrison. The effect of Wham! on the public, especially teenage girls, was felt from the moment they finished their début performance of “Young Guns (Go for It!)” on Top of the Pops. Michael wore espadrilles, an open suede jacket, and rolled-up denim jeans. Ridgeley stood behind him, flanked by backing dancers Dee C. Lee and Shirlie Holliman. Afterwards, the song shot into the Top 40 at #24 and peaked at #3 in December. The following year (1983), Dee C. Lee began her work with Paul Weller in The Style Council, and was replaced by Pepsi DeMacque. Holliman and DeMacque would later record as Pepsi & Shirlie.
Wham! followed up “Young Guns (Go for It!)” with a reissue of “Wham Rap! (Enjoy What You Do)”, “Bad Boys” and “Club Tropicana”. By the end of 1983, Wham! were competing against pop rivals Duran Duran and Culture Club as Britain’s biggest pop act. Their début LP Fantastic spent two weeks at #1 in the UK album charts in 1983.Notoriety and increased newspaper and magazine coverage were duly achieved with their antics of placing shuttlecocks down their shorts during performances on their first tour, the Club Fantastic Tour.
Soon after this Ridgeley became conscious of legal problems with their initial contract at Innervision. While the legal battle raged, Innervision released a medley of non-single album tracks from Fantastic, entitled “Club Fantastic Megamix”. Wham! publicly denounced the release and urged fans not to buy it. After all the legal wrangling, Innervision admitted there were royalty discrepancies with Wham!’s contract, the fall-out of which led to the bankruptcy and eventual dissolution of Innervision altogether in 1985
Now signed to Epic Records (and other CBS Records imprints around the world), Wham! returned in 1984 with an updated pop image.

These changes helped to propel Wham!’s next single, “Wake Me Up Before You Go-Go”, to the top of the charts around the world. It became their first UK #1 single and rose to that position in the USA as well, accompanied by a memorable video of the duo with Pepsi and Shirlie, all wearing Katharine Hamnett T-shirts with the slogans “CHOOSE LIFE” and “GO GO”.
The next single “Careless Whisper” was issued as a George Michael solo piece, yet unlike any Wham! single except “Wham Rap!” and “Club Tropicana”, it was co-written by Ridgeley. The song, about a remorseful two-timer, had more emotional depth than previous releases. It quickly reached #1, selling over 1.3 million copies in the UK.”Careless Whisper” marked a new phase in George Michael’s career, as he somewhat distanced himself from Wham!’s playboy image.

In the U.S.—so as not to confuse American listeners just being exposed to Wham!—the single was billed as “Wham! featuring George Michael”.
In the autumn of 1984, Wham! returned as a duo with “Freedom”, another UK chart-topper and the first single for quite some time to reach #1 in the UK without an accompanying video. Wham! subsequently decided to use a video edited together from footage of their tour of China in time for “Freedom’s” U.S. single release. The group by then had achieved three number-one singles in a row. In November, they released their second album, Make It Big, which quickly climbed to #1 on the album charts, and the band set off on an arena tour at the end of 1984.
The double A-side single “Last Christmas/Everything She Wants” became the highest-selling single ever to peak at #2 in the UK charts. It stayed at #2 for five weeks and, to date, is the 24th best-selling single of all time in the United Kingdom, selling over 1.4 million copies in the UK. Wham! donated all their royalties from the single to the Ethiopian famine appeal to coincide with the fund-raising intentions of Band Aid’s “Do They Know It’s Christmas?”, the song which kept them out of the top spot. Nevertheless, Band Aid’s success meant that Michael had achieved #1 status in the UK within three separate entities in 1984—as a solo artist, as one half of a duo, and as part of a charity ensemble.
At the end of 1985, the U.S. Billboard charts listed “Wake Me Up Before You Go-Go” as the number-three song and “Careless Whisper” as the number-one song of the year.

Sporting a beard, Michael appeared with Ridgeley onstage at Live Aid on 13 July 1985 (although they did not perform as Wham!). Michael sang “Don’t Let the Sun Go Down on Me” with Elton John while Ridgeley joined Kiki Dee in the row of backing singers. In September, Wham! released the single “I’m Your Man” which went to #1 in the UK charts.
Michael claimed to have begun a relationship with model/makeup artist Kathy Yeung around this time, and Ridgeley began one with Keren Woodward of Bananarama. Ridgeley also took up the hobby of rally driving. “Last Christmas” was re-issued for the festive season and again made the UK Top 10, peaking at #6, while Michael took up offers he was starting to receive to add his voice to other artists’ songs.

He performed backing vocals for David Cassidy, and also for Elton John on his successful singles “Nikita” (UK #3) and “Wrap Her Up” (UK #12), on which he sang co-lead vocals.
Michael was keen to create music targeted at a more sophisticated adult market rather than the duo’s primarily teenage audience and therefore, Michael and Ridgeley officially announced the breakup of Wham! in the spring of 1986.

Before going their separate ways, a farewell single “The Edge of Heaven”, and a greatest hits record titled The Final would be forthcoming, along with a farewell concert entitled The Final. Announcing the breakup, Michael said: “I think it should be the most amicable split in pop history.”
The farewell single reached #1 in June 1986. “Where Did Your Heart Go?” was the group’s final single in the United States. The song, originally recorded by Was (Not Was), was a gloomy and sombre affair. The duo’s last release was a double-LP collection of all the singles to date, including some extended versions. This was released in North America as the severely pared-down Music from the Edge of Heaven with alternate tracks.
At London’s Wembley Stadium on Saturday 28 June 1986, Wham! bade goodbye to their fans and each other with an emotional embrace at the end of its final concert. 72,000 people attended the eight-hour event,which included support artists, on a scorching hot day in London. The band had been together for five years, selling over 25 million albums and 15 million singles. Foreign Skies, the documentary of their tour of China, received its world premiere as part of the festivities.
For several years after becoming a solo artist, George Michael spoke negatively, in public, about his time with Wham!, partly because of the negativity of intense media coverage on Ridgeley. Michael complained of the constant pressure he felt, and he claimed that the duo had been mistreated financially. He also spoke disparagingly about some of the songs from the Wham! repertoire, especially the songs from the first album.
However, his perspective on the era has softened somewhat in recent years. At his solo concerts he still performs “I’m Your Man” and “Everything She Wants”, one of the more critically acclaimed songs from the Wham! era.
Andrew Ridgeley moved to Monaco after Wham!’s break-up and tried his hand at Formula Three motor racing. Meeting with little success, Ridgeley moved to Los Angeles to pursue his singing/acting career, the failure of which caused him to return to England in 1990. Regardless, CBS Records, having taken up the option on Wham!’s contract that specified solo albums from Michael and Ridgeley, released a solo effort from Ridgeley, Son of Albert, in 1990. After poor sales, CBS declined the option of a second album.
On 25 June 1988, George Michael’s 25th birthday, he played the third of three dates at Birmingham’s NEC as part of the Faith World Tour. He became visibly emotional when he was surprised on stage by many members of his family with Andrew Ridgeley, who was pushing a trolley carrying a huge birthday cake. They led the 13,000-strong crowd in a rendition of “Happy Birthday”, before Ridgely accompanied Michael in a performance of “I’m Your Man”.
In January 1991, Ridgeley joined George Michael on stage for a few songs at the encore of his performance at the Rock in Rio event at the Maracanã Stadium in Rio de Janeiro, Brazil.
On 21 November 2009, there was a Wham!-themed night on television’s The X Factor in the UK. Michael later appeared on the show’s final episode, performing a duet of “Don’t Let the Sun Go Down on Me” with finalist and eventual winner Joe McElderry.
In 2012, Michael said that there was no truth in speculation that he and Ridgeley were set for a Wham! reunion to mark the 30th anniversary of the group’s first record.