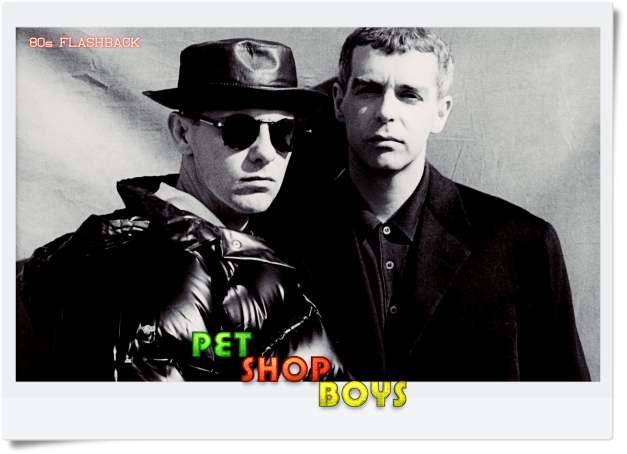 Pet Shop Boys (formed 1981)
Pet Shop Boys is the name of an English electronic pop duo who rose to fame in the 1980s and whose career has spanned three decades. The personnel of the band is: Chris Lowe: keyboards and occasional backing vocals and Neil Tennant, vocals and keyboards.

Formation: Neil Tennant met Chris Lowe in 1981, in a shop on Kings Road, London. They shared a mutual love of electronic dance music and starting working on their own material together. Initially, they worked from Tennant’s Chelsea flat and eventually moved into a small studio in Camden Town. It was around this time that some of their early hits were written, including ‘It’s A Sin’, ‘Jealousy’ and ‘West End Girls’.

In 1983, Neil Tennant was commissioned to interview Sting’s old band, The Police, for Smash Hits magazine, in New York. He used his time in the US city to have a meeting with Bobby O, the New York record producer. Bobby Orlando (as he was also known) liked the demo tape that Neil had taken with him and agreed to produce ‘West End Girls’. The track became a hit in Los Angeles and San Francisco.

Music Career: Pet Shop Boys cut their ties with Bobby O in 1985, though Bobby O departed with and agreement allowing him significant royalties from Pet Shop Boys’ future sales. They went on to hire Tom Watkins as their manager and soon signed a record deal with Parlophone Records. Following the signing, Pet Shop Boys released ‘Opportunities (Let’s Make Lots of Money)’. The B-side to the track, ‘In the Night’ was later famously used as the soundtrack to the popular TV series, The Clothes Show. Releasing a new version of ‘West End Girls’ turned out to be a good move for the band, as it slowly climbed to number one on the UK chart.

The debut album from Pet Shop Boys was entitled Please and was released in 1986. Later that year, they released a remix version of their tracks, named Disco. Their second number one single came in 1987 with the release of ‘It’s A Sin’. The single caused a great deal of drama in the lives of Tennant and Howe, when the DJ Jonathan King accused them of plagiarizing Cat Stevens’ ‘Wild World’. King was ordered to pay damages when Pet Shop Boys decided to sue him and donated their winnings to charity.

Pet Shop Boys’ next single featured Dusty Springfield on vocals. ‘What Have I Done to Deserve This?’ went to number two and was included on the band’s second album, Actually. Pet Shop boys were included in a TV programme commemorating the death of Elvis Presley, performing ‘Always on my Mind’ and ‘Baby Let’s Play House’.

In 1988, Pet Shop Boys released Introspective, their next studio album. That same year, the band released a video, directed by Jack Bond and starring Barbara Windsor, Joss Ackland and Gareth Hunt, entitled It Couldn’t Happen Here. The film received a mixed response but Pet Shop Boys used clips from the film in the video for ‘Always on My Mind’, which famously kept The Pogues’ ‘Fairytale of New York from the Christmas Number One spot. The video for ‘Hurt’, also directed by Jack Bond, starred Ian McKellen as a vampire. The Introspective era also saw them working with record producer Trevor Horn and film director Derek Jarman.

The fourth studio album from Pet Shop Boys was Behaviour and included such tracks as ‘Being Boring’ and ‘So Hard’. In 1991, Pet Shop Boys released a cover of U2’s ‘Where the Streets Have No Name’, as a medley with ‘Can’t Take My Eyes off You’, originally performed by Frankie Valli / The Four Seasons.

During a brief break from recording, Pet Shop Boys worked on a soundtrack for the film Scandal, starring John Hurt and Bridget Fonda. They also worked with Liza Minnelli and Electronic (Bernard Sumner and Johnny Marr’s band).

In 1991, Pet Shop Boys set up their Spaghetti Records label, on which they released the soundtrack to The Crying Game, starring Stephen Rea, Miranda Richardson and Tony Slattery.

Pet Shop Boys then changed their image, employed the use of computer imagery and released a cover of Village People’s ‘Go West’, which many consider to be their signature tune. Their fifth album, Very, was partly produced by Stephen Hague, renowned for his work with OMD, Erasure and New Order.

At David Bowie’s request, Pet Shop Boys remixed a version of ‘Hallo Spaceboy’, which they performed with the Thin White Duke on Top of the Pops. In 1996, the released their sixth studio album, Bilingual. Two years later, they teamed up with the likes of Elton John, Divine Comedy, Suede, Robbie Williams and Marianne Faithfull to create a charity album of Noel Coward covers.

The next album from Pet Shop Boys was Fundamental, featuring Elton John and Richard X.

2009 saw the release of Yes, produced by Xenomania. ~ by contact music